What do you do when it's 99 degrees outside with 100 percent humidity? Hopefully you stay in an air conditioned building, spend time with your family, swim or do anything to stay cool.

What did I do? Went hunting for autographs of course.

Wifey scored tickets from work and she was open to braving the heat for me. We got to the stadium before the gates opened and waited for about 30 minutes before being allowed in. Wifey had no intention of standing in the blistering sun with me so she went to our seats in the covered lower reserve section.

I was one of the first twwo fans into the seating area. I made my way to the first base line and saw Willie Randolph B-lining toward the dugout. The other fan called out to him and he actually stopped. He signed for both of us. Shocked. 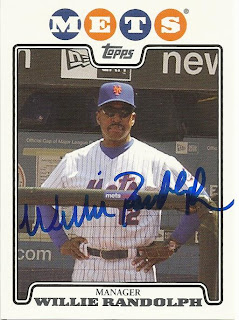 Mike Gonzalez was running by himself and I asked him to sign and was told he'd get me later. Very few fans had made their way to the rails so I slid next to the dugout as another player came out. His jersey was covered and his hat was pulled down covering his face. I wasn't sure but I whispered, "Troy". He stopped and turned to me as I scrambled to pull his card out. 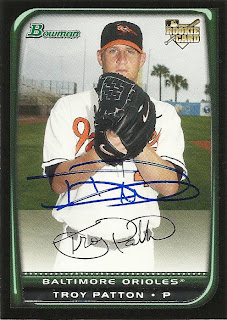 More pitchers emerged from the pen and were running in the outfield so I again moved along the line. Jake Arrieta and Alfredo Simon were throwing, a football. I guess even pro baseball players are looking forward to football. Alfredo Simon looked as if he had never thrown a football and quickly ended the game. 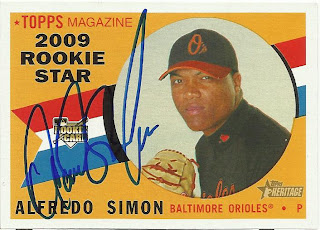 This one is staying in the collection and a Orioles Crown blank is now available for trade. Simon was more than generous as he signed everything I had brought with me.

Gonzalez remembered his promise and came directly to me when he was done warming up. This guy is a great signer. I can always count on him to give my sharpie a workout. 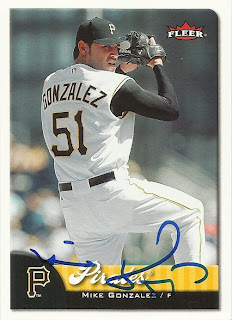 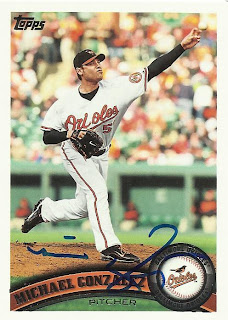 It seems as Mike has started to add his number to his scribbling. His signature actually looks decent on this one, replacing his 2010 Topps Update from earlier this year.

Saturday's pitching star Brad Bergesen was in a great mood and made his way down the line signing for everyone. 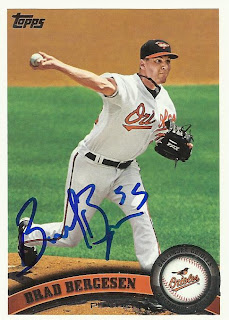 After Bergesen signed, the masses started to pour into the stadium. I moved yet again, this time behind home plate hoping to get guys coming out to warm up. I was alone there for a long time when Arrieta came back out to run. He told me he would get me after running and almost forgot. He signed for the entire first baseline when done and came running back to the clubhouse, head down. I called out and he said, "I gotta get inside", without looking up. Then he raised his head, saw it was me and stopped short. He came over, signed for me, then ducked inside. Thanks for remembering me Jake. 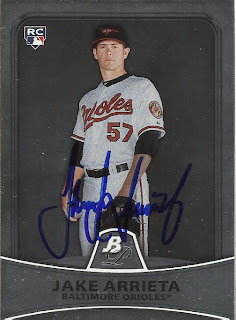 I really like this set so I am holding on to this one. I have a 2008 Bowman Draft Picks available to anyone in need.

Robert Andino was the last player to sign, keeping up his reputation as an awesome signer.
Robert Andino 2010 Upper Deck #81 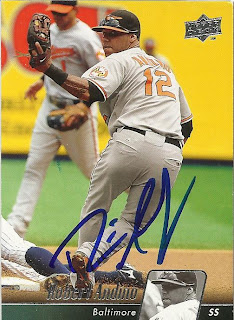 As for Wifey, she sat in the shade reading a book the whole time, never fussing. Man I lucked out on that one.

If anyone is interested in my duplicates, let me know.
at 8:25 PM