Let me take you back to a much more pleasant time, April 9, 2011, when my Oriole dream began.

The Orioles were battling the Texas Rangers for American League supremacy and first place splendor was shining at the Yard. In the glow of the stadium lights I was forgoing my teams 5-0 dismantling of the Rangers in dapper style. The lovely wifey was hobnobbing with construction types and that called for a gussied up Orioles fan to miss a game.

Maybe it was the prestige of the exclusive Center Club, but I was feeling elite. Or maybe it was just the tux I was forced to wear. Not sure, but it actually felt cool, something I know little about. Around the entire club were auction items to benefit Everyman Theatre and for some reason I put down my credit card, just in case. Just in case became a reality when four Orioles tickets and a parking pass for any game of my choosing fell into my lap. I also bought up a dress for wifey that every woman wanted but couldn't fit in to. I had to counteract the baseballness of my actions for her benefit.

The Orioles home schedule was a little dull until I started thinking about players I wanted to see, not teams. Then it became easy. Only one name came to mind of who I wanted to see play. Albert Pujols and the St. Louis Cardinals, June 30th. My order was placed, the date circled and then I waited.

I waited for the Orioles to show their true colors and fall from grace. I waited for comfortable Spring weather to turn to disgusting stickiness. I waited for a day to not have to work. I waited for Albert Pujols to break his hand. Starting to get nightmarish.

I was undaunted. Determined to make a day of it, take off work, get autographs and watch a win. OK, so I made at least I made a day of it. My Orioles showed a normal disdain for sharpies and Brian Matusz showed he could throw batting practice. After three and a half innings last night and an 8-0 deficit, my nightmare was full blown.

But then I woke up.

I was sitting here 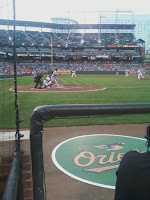 I texted pictures of my seats to any friend I thought would be jealous and a few who would chastise me for wasting my money. These were truly awesome seats, except when players wouldn't stop swinging bats in the on-deck circle. The were blocking my view of the plate. But I won't complain.

Finally, the bullpen settled things down and the bats heated up and they actually made it respectable. Wifey, my step-brother and his friend joked that we could never see a major league game from any other seats again. Minor league games would now only be watched from inside the dugout.

Overall it was a good experience, neither a horrific nightmare nor the "Dream" my ticket promised. Had players been more receptive to signing prior to the game it would have been a dream, more on that to come.

I plan on chronicling my exploits in the coming days, stay tuned.
at 8:37 PM