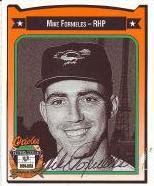 48 years ago today Mike Fornieles ended his 12 season major league career as a member of the Minnesota Twins. He was a hybrid pitcher during his career, starting and finishing games, only moving to the "closer" role in 1959 with the Red Sox. Mike excelled in this role, being selected to the 1961 All-Star team and leading the league in saves (14) in 1960. Just a little perspective, 31 different pitchers eclipsed that mark in 2010.

Mike was a bird in the latter part of 1956 and early in 1957. He pitched 2 of his 4 shut-outs wearing the orange and black, but was dealt to the Red Sox for Billy Goodman before he flourished. All-in-all, he pitched in 45 games, went 6-13, struck out 96 and saved one game for the O's.