is going to have wait just a few more minutes.

I left the player lot with 3 signatures in the books and was actually ready to get home. When we walked away from the player lot wifey ridiculed me for making her stand alone for hours. It was more like one. I didn't know there was a drunk guy near her making life miserable. Whoops again.

We had to park in a lot a mile from the stadium so we knew we had a good walk ahead of us. It was a great evening, 80 degrees with a slight breeze. Couldn't ask for more. We walked alongside the warehouse and at the light-rail station I decided to continue toward the Orioles retired numbers. That was a good decision.

In the employee lot right near Will-Call, there was a group of people talking. A 13 year old kid was decked out in a full suit, Orioles baseball hat and bright orange Oriole tie. His outfit gained our attention. I looked over saw him and then stopped in my tracks. I swung the backpack around grabbed my case of cards and pulled off the top card in one fluid motion. Wifey pulled out her phone and I assume she started Facebooking as I walked toward the group.

I waited for the conversation to die down and I could step in in the least intrusive way. I was noticed by a few members of the group and conversation soon stalled and I stepped up.

"Mr. Anderson, could I trouble you for an autograph"?

"Sure" he said, reaching for my sharpie and card.

I asked if in his new role he would be around more this year and he said "absolutely". He looked at the card I handed him, flipped it over and asked "front or back"?

"Front", I blurted. "You can turn it sideways so you don't have to sign right across your face". And he did just that. I thanked him again and told him it was nice to have him back in town.

As I was putting his autograph into my case I was grinning from ear to ear. My night was made and I had my wife to thank for it. Her lonliness was a dagger in my heart so we left the player lot and I can add this to my collection: 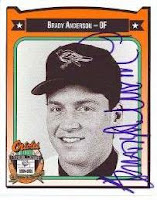 I now have a Brady Anderson 1996 Bowman, Jake Arrieta 2010 Topps Orioles and Mike Gonzalez 2007 Topps Heritage (smeared) and 2003 Leaf available for trade if anyone is interested.