I try to be as organized as possible with my requests, writing and organizing letters when I have time, waiting until I have the stamps or addresses to send to.

A few months ago I came across a letter made out to Mr. Nelson and envelope addressed to Tex Nelson. Naturally, I assumed this was the correct player, but didn't have any cards for him. It didn't make sense but to err is human. I put them away until I could get cards for him.

Fast forward to last week. I have cards for two players named Nelson, Bob and Roger. Roger is not Tex, I know that much and no address is listed for Bob. My powers of deduction said "idiot". Bob is Tex. Oh well, sent off to him and in a week reaped the benefits. 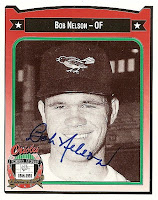 His given name is Robert Sidney Nelson, yet he doesn't show up in search results on Baseball Reference as "Bob". Weird. He only shows up as "Tex", yet his nickname listed on the site is "Babe". Weirder still. He was signed as an amateur free agent in 1955 and made the big club the same season. The entirety of his major league career was in Baltimore spanning 79 games. After five more minor league seasons he called it quits in 1961. He hasn't garnered much attention since leaving baseball, on two previous TTM requests in the last three years.
at 6:55 PM