Straight From the Shore

I wanted to thank Mike over on the Eastern Shore for helping me out with a little 50/50 action. He was very accommodating as I only truly needed Mike Devereaux on a Crown card, but had no doubles to send. He allowed me to send a few more Ryan Minor cards for him to even out the deal. Thanks for the help.

Devo is not the easiest signer now-a-days, shying away from TTM signings since he is with Schulte Sports. So unless you are paying for it, in-person during the season is the best way to get it done. Mike was one of the first auto's I traded for when I started my quest and his 1991 Upper Deck auto is available if anyone is interested. 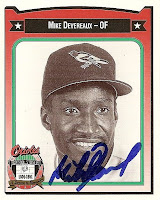 Minor was unable to live up to the hype surrounding him after he was drafted by the Orioles for the second time, he declined to sign following the 1992 amateur draft. He was drafted in the late rounds but quickly blew through Delmarva and Bowie on his way to the big leagues to be the heir apparent to Cal Ripken at third base. His claim to fame is as the starting third baseman the night that Cal Ripken ended his consecutive game streak at 2632 games. His final professional game as a player came for Lancaster in the Independent league in 2005. Since then, he has been in management, player management. Currently he is the manager at Delmarva, alongside hitting coach Devereaux.

This scan doesn't do the card justice. The signature really stands out on the chrome so well, I'm going to keep him. I have a 1999 SP Authentic Chirography Certified auto now moving to the trading block.