I received my newest Orioles Crown card from Paul Hartzell in 35 days. I am starting to amass a decent collection of postcards as Paul signed the three I sent to him as card protectors. 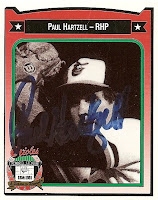 Paul is the owner of a 27-39 career record in the major leagues with the Angels, Twins, Orioles and Brewers. His career ERA is below the 4.00 mark, but after he left the Angels he was never given the opportunity in more than 30 games. He is also the owner of one of the most out of focus baseball cards ever (see above), as well as being traded for Hall of Famer Rod Carew ("He converted").

It seems life after baseball has treated Paul fairly well. He attended Lehigh University before being drafted by the Angels and put his college to good use becoming a Vice President for a tech firm. VP and 10th round pick, not too shabby.
at 3:59 PM