Last week was an extremely slow week, with only a single success, Billy Loes. It took three weeks for this bad boy to come back to me. It seems my monetary incentive paid off for my new addition. 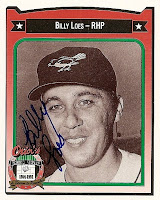 Loes was an 11-year veteran playing for the Brooklyn Dodgers, San Francisco Giants and our hometown Orioles. He pitched in three different World Series', all against the New York Yankees, finally earning a ring in 1955. His first season in Baltimore brought personal accolades as he was voted to his first and only All-Star game. He, as well as Gus Triandos and Hall of Famer George Kell, were the three representatives for the Birds in the Mid-summer classic. His stint in town lasted nearly four years posting some of the best numbers of his career. His tenure ended following the 1959 season when he was tradded with Billy O'Dell to the Giants for Jackie Brandt, Gordon Jones and Roger McCardell.

Hopefully players can sense that I just turned 30 and the requests will just flow in this week.
at 7:38 PM