From the Video Game to My Collection

Anyone who has played PlayStation 2 or 3's series MLB: The Show will recognize the voice of my most recent success, maybe not his signature. Rex Hudler spent 13 seasons in "The Show" and another playing over in Japan before lending his voice to the game, literally and figuratively.

For 10 seasons he was the play-by-play voice of the Los Angeles Angels of Anaheim, and became known for his rhyming and off-the-wall calls. He did both radio and television work but fans outside of California may know him better from the video game franchise. For the past five installments of the game Hudler teamed up with Dave "Soupy" Campbell and Matt Vasgersian to supply the voice over work for the game.

But most importantly, "Wonder Dog", was a Baltimore Oriole. For one season. 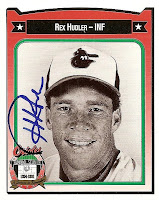 Rex was drafted by the Yankees and started his career in New York but was traded after just two seasons with Rich Bordi in exchange for Gary Roenicke and Leo Hernandez. Baltimore used Hudler in 1986 primarily as a defensive replacement, playing in 14 games but only making one plate appearance. His career stat line with the Orioles: 0 hits, 1 at-bat, 0 walks, 1 stolen base and one run scored.

After Baltimore he spent time with the Montreal Expos, St. Louis Cardinals, Yakult Swallows of Japan, California Angels and Philadelphia Phillies. For me, I always thought of him as an Angel because I only had cards of him on that team. I guess he thought so too, going to work for them and all.
at 11:26 PM