Call this a little prospecting. Beato has been in the Orioles farm system since 2006, making it as high as Bowie last season. Hopefully he can crack the Major League roster and make the jump to the personal collection. His numbers haven't been great but he is only 23 with a lot of upside. 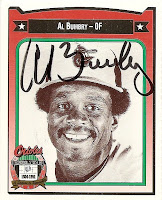 My second time sending to Bumbry has landed his Crown card in my collection. This success took just under two months arriving with some unexpected guests below. Bumbry was a 13 year Oriole, All-Star, World Series Champion, fan favorite and overall great guy. He still lives in the Baltimore area and can be found at all sorts of Orioles events, always ready to spend time with the fans.

These two Topps cards were add-ons from Mr. Bumbry. They aren't in the best shape but you can't argue with free. 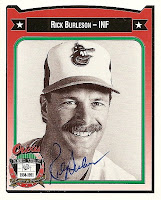 The last recorded success from Rick Burleson was in November of 2008, so I am quite grateful to get this back signed, and in only five months. I guess the 2009 Harvey autograph list was worth the investment. Burleson was a middle-infielder who ended his 11 year career in Baltimore after the 1987 season as a career .273 hitter. From 1977-79 Burleson was named to the American league All-Star team and again in 1981, with 79 also bringing his only Gold Glove.

Fahey may have looked more like a bat-boy than a ballplayer when he came up with the Orioles but he was a gritty player. He became a fan favorite probably because of his slight frame and his tenacity on the field. He filled whatever role the Orioles needed and did so admirably. He has only seen time in the bigs as an Oriole but is still around the game working for another opportunity. 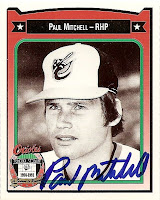 Mitchell was the Orioles first round selection in the 1971 amateur draft, picked seventh overall. His debut came in 1975 against the Boston Red Sox with 3.1 innings and five earned runs. The O's eventually pulled out the win, Mitchell earning a no decision. Mitchell turned it around and went 3-0 in his 11 games before being traded to the Oakland A's as part of the Reggie Jackson deal. 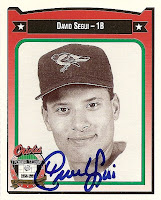 Segui is a great signer. I went 5 for 5 this time with the Crown card in the mix. In my requests I stress the importance of the Crown card to my collection and ask for it to be signed above all else. Segui actually read my letter before signing and the Crown card is the without his usual inscription MATT 16:26. After all of my bitching last week it seems there are players out there that do take the time. My faith has been restored.