Doug Sisk donned an Orioes uniform during the 1988 season. Unfortunately his lone season in Baltimore was abismal for the team after starting the season with 21 straight losses. Sisk had a decent season, appearing in 52 games as a reliever and a .500 record. His ERA was third on the team among pitchers with more than ten appearances. After the season he became a free agent, landing with the Cleveland Indians, but never playing in a game for that club. His career ended in 1991 in a limited role with the Atlanta Braves. 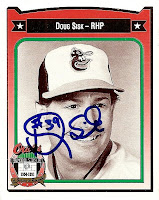 Sisk has been extremely generous with his autographs, signing more than 90% of his requests. His short time in town makes card selection limited. It's a nice addition to the Crown set while giving me doubles 3-5.
at 7:18 PM