Yesterday I received my strangest success to date. Actually my wife did, and that is partly why it's strange.

I sent to Babe Birrer in 2008 with my first batch of Orioles Crown cards. There had been successes with him around this time, but nothing since. I figured the card was lost and I wouldn't get it back. I was even looking to trade for the card on SportsCollectors.net, but hadn't pulled the trigger.

Then, yesterday afternoon I get a call from my wife about a weird letter she received. Immediately I thought of the worst, summons, lawsuit, divorce papers, I had no clue. Then she described it's contents and I was a little confused.

She said "it has one of your little cards inside, but it's taped to an index card. I don't think I can get it off." It seems that someone, presumably Mr. Birrer taped the 1991 Orioles Crown card to part of an index card. I guess for more strength during shipping, but for risk of damaging the card I will leave it.

The weirdness does not end there. The success was not sent in my traditional SASE, it was from the Activities Department of a nursing home in New York and was addressed to my wife, using her maiden name. Needless to say she was slightly weirded out by it, but was put to ease when we realized I probably addressed it with some of those free address labels for The Shriners. The letter was addressed by a definitely feminine hand, much different than Mr. Birrer's on the card, my guess a nurse or family member.

Here is my 1/1 Babe Birrer 1991 Orioles Crown #??? Wait I can't read the number there is an index card covering it. It is difficult to see all the details of the card in the scan. 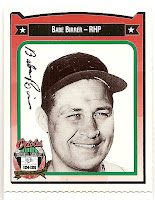 Babe's career spanned four calendar years and three major league seasons with the Detroit Tigers, Orioles and Brooklyn Dodgers. He earned the nickname "Babe" during 1955 with the Tigers when he hit two 3-run home runs during a relief appearance. As a reliever in 1956 he only appeared in four games with the Orioles before being bought by the Dodgers. During his big-league career he did hold Yogi Berra, Felipe Alou and Ernie Banks hit less against him, in limited at-bats.
at 3:25 PM