In honor of what would have been his 70th birthday, I bring you Gene Brabender. Gene was a different type of pitcher in the mid 60's, standing in at 6'5" and tipping the scales at 225lbs. His appearance earned him the nickname "Lurch", but I don't remember Lurch needing galsses. Steve Barber even went as far as to call him "A hard throwing right-handed country boy". It could have been much worse.

He made his debut in 1966 as a reliever helping the Birds get to the World Series, but didn't play in the championship. '67 and '68 saw him move to the starting rotation before being selected by the clandestine Seattle Pilots.

He will forever be the winningest pitcher in Seattle Pilots history with 13. When the team was purchased and moved to Milwaukee, Gene had a chance to play in his home state. It wasn't a great homecoming as he put up his worst numbers. He retired after the '68 season but tried a comeback in the Pacific Coast League in 1971, falling short of the bigs.

Gene passed away in his hometown of Black Earth, Wisconsin on December, 27 1996 at 55 years old. Happy Birthday Mr. Brabender. 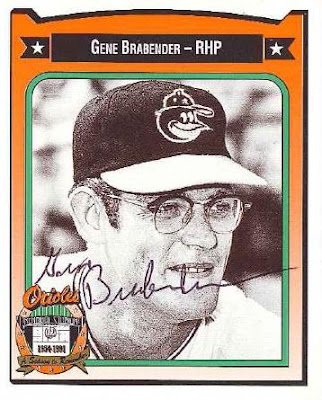