I had a huge eBay sale close today and decided to splurge. I think I should have saved my money as nothing truly jumped out at me. You be the judge. 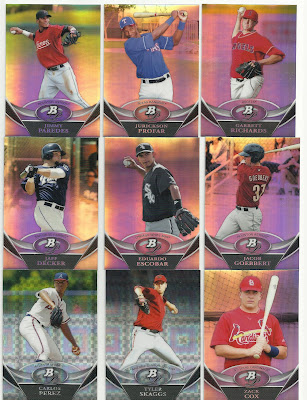 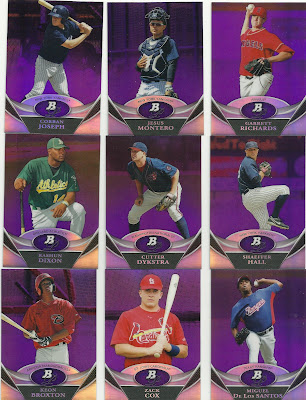 The Verdict
These are real shiny cards that don't really do anything for me. The parallel versions are boring and depending on the background, difficult to find. The purple parallels were a gimmick I liked when I pulled a Bryce Harper, but when he isn't there I hate em. I wish there were more prospects and less retired baseball players. Seriously, the product released in July and Manny is still in the set. He retired in April Topps. Damn. 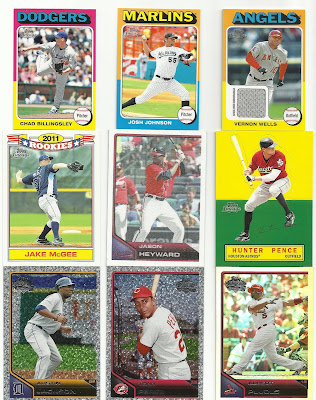 The Verdict
I liked being guaranteed a hit in my blaster. I did not like the fact that is was wrapped up by itself and not in an actual pack. Topps took all the fun out of pulling a relic card and I knew the first card I saw was most likely the best of the box. Apparently the only way Topps could guarantee my "hit" was to put it in seperately.

I was a big fan of the cloth card until I realized it was a sticker. However, I cannot hate on the Rookie insert set. It takes me back to sifting through hundreds of rack packs at the grocery store to find Cal Ripken on the front and basking in the glossy goodness of overproduction. Those were the days.

The Verdict
These cards are just Allen & Ginter with action shots and a textured look. I prefer it to Ginter but had I gotten an actual Gypsy card I would have torn it in half. Apparently I am not a fan of gimmicks today.

Are cards are available as I have already pulled my three Orioles base cards. Please take these off my hands, any of em.
at 12:00 PM