Life has kicked up a few gears. I now have a 45 minute commute, get to work at 6am and am home usually before 8pm. My work day is long and when I get home I eat dinner, converse with Wifey and sleep. Even weekends have been busy with yard work and fixing up the house to sell.

Needless to say, the blog has been neglected.

But, I am still active in the trade-o-sphere and have a few trades to post oer the next few days. This one for one swap came courtesy of Sports Collectors. 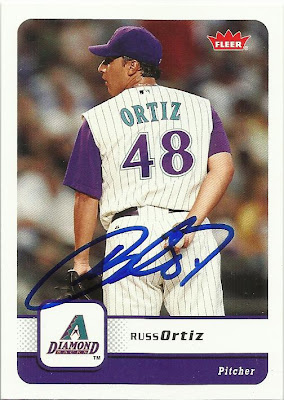 Ortiz had a great three year stretch with the Giants and Atlanta Braves where he was downright dominant. Then came Arizona, not very good. His ERA was north of 6.00 so he was released and naturally landed in Baltimore. The decade of the 2000's saw the Orioles try to capture lightning in a bottle with aging "talent". Russ was one such attempt.

He pitched in 20 games, went 0-3 and had an 8.48 ERA. Not very good for a one-time All-Star. Naturally he was released yet again but found no better luck in Houston and Los Angeles.

Wikipedia has him listed as retired but I can't fully trust the page. The lone photo features Ortiz as an Oriole, not a Giant or Brave as would be expected.

Ortiz appears as an Oriole in the 2006 Topps Update set if anyone has an autograph available. I would also be looking to grab a base card for TTM attempts if no one has done the work already.
at 6:30 PM