Jus my second TTM success of the month took quite some time to return. I purchased duplicates of sets I & II of the Crown set and plan on sending out a bunch of requests this week. I need to fill a few holes and bring home a few upgrades. Hopefully this one is the first on many to come. 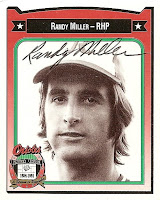 Miller was the fifth round pick of the Orioles in 1974 out of the University of California, San Diego. He had phenomenal success in A and AA ball, prompting the Orioles to call him up in September of 1977. His lone appearance of the season came on September 7, with bad results. He six batters over .2 innings, allowing four hits and three runs for a 40.50 ERA.

After the season he was traded along with Rudy May and Bryn Smith for Joe Kerrigan, Gary Roenicke and Don Stanhouse. The rest of his major league career spanned five games with the Expos in 1978. I was unable to find anything interesting about him online, my usual go-to, wikipedia, proved quite useless. Anyone have anything on him?
at 7:35 PM