Yesterday I made my third pilgrimage to Hightopps Backstage Bar and Grille in Timonium for another autograph signing. This time I was able to get Scott McGregor for my Crown set among other cards.

I ran into two friends working there that I used to work with in the restaurant business, which was a nice surprise. One of em even bought me a couple beers. Free is always good.

After my first drink I started looking for Mr. McGregor but couldn't find him. He was so incognito, Chris the bartender didn't even realize he was signing. The manager and a timely visit by a friend of mine shed a little light onto his whereabouts.

No on with the free stuff. 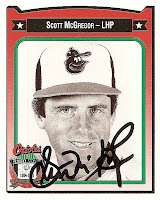 I gave away my fourth '88 Topps and traded a fifth for this: