The Latest and Greatest

Manny has been a tough autograph to come by after his MLB days ended. Steroids and a lack of consistency bounced Manny from the majors after 2006. He played baseball in Italy in 2008 which is probably why there hasn't been a recorded success since 2007. I want cards featuring the player as an Oriole whenever possible but I am prepared to settle whenever necessary. Hopefully this will be quickly upgraded. 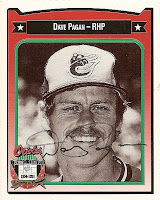 Pagan made his way to Baltimore in 1976 via the New York Yankees, alongside fan favorites Rick Dempsey, Scott McGregor and Tippy Martinez. His entire Bird career spanned 20 games, most of which were as a reliever. His tenure was short here as he was selected as the 29th pick in the 1977 expansion draft by the Seattle Mariners.

When I started this project I thought it was a novel idea and I was the only person doing it. I was quite wrong, but I smartly became acquaintances with those who had been doing it longer and better. Ryan Salsman is one of those guys and the next two cards are from him on credit. He read my post about missing out on Felix Pie and Nate Snell at FanFest and took pity on me, I will hook him up when I can. Thanks.

Pie started the 2009 campaign like I thought he would, slowly. I didn't think that he would turn it around and show glimpses of the five-tool talent he had been touted as, I was wrong. I feel he has a better feel for center field than Adam Jones but will be hard to move a gold-glover to another position. Now that my expectations are up for Pie this year I am expecting to be let down, at least I have a card from this notoriously difficult signer.

I am getting closer to the Snell card I want, 1991 Crown, by moving my over sized postcard out of the personal collection. I traded for the postcard last week because Ryan was not bound to send me this card, but I am happy to receive it. This card is closer in size and age to my white whale and I will eventually snare it.
at 5:35 PM