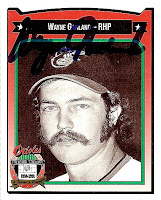 The third time was a charm for Wayne Garland after he came out of high school. He was drafted by the Pirates in 1968 and the Cardinals in 1969 before finally signing with the Orioles following the July amateur draft in 1969. His first three seasons from 1973-75 were lackluster, but things changed in 1976. Wayne went 20-7 during his last season in Baltimore before using free agency to escape to the Cleveland Indians. Wayne never regained his form of 76 and ended his career with Cleveland in 1981 a career 55-66 pitcher. 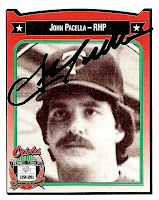 John Pacella's Oriole career spanned a mere six games and 14.2 innings during the 1984 season. He bounced around the bigs playing with five teams in six major league seasons.

My second TTM success of spring training is personalized and will bounce out his Bowman Sterling Autograph I traded for earlier this month. Anyone need a Tillman auto for their collection?

Koji was my biggest wild-card from spring training this year. I haven't been sure of his signing habits and was extremely pleased to see two successes from him today. I like the way the X-Fractor auto looks in person even if it doesn't translate to the computer so well. His signature is fuller on this card which is why I am keeping this one.

Number two is still a sweet autograph but I like the X-Fractor slightly more. So far this spring I have received 3 of my 16 requests. Still a long way to go.
at 11:05 PM