Last Man Standing, In the Mailbox

Things have slowed down in my mailbox, only a success today. Hard to think the onslaught would continue, but consistency is nice. Another Crown hit so I am slowly chugging toward 50%. Lets keep it up fellas. 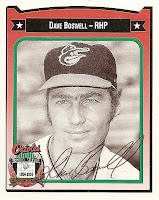 Dave Boswell is a local boy who played the majority of his final season in the major leagues with his hometown team in Baltimore. The first seven seasons were spent in Minnesota with a quick stop in Detroit after his time here.

In Minnesota he was a starter, registering a 20 win season in 1969, but ended his career in the pen. In that same season he heroically pitched against the Orioles in the ALCS, giving up one ER in the top half of the 11th inning, and taking the defeat. When he retired from baseball he ranked in the top 50 players for K's/9 innings.

He may be best known for fighting teammate Bob Allison on the Twins, then being busted up by his manager Billy Martin. Welcome to the collection, try and play nice.
at 11:07 PM