The Life of a Journeyman

Nine years and seven teams is definitely a journeyman career.  But a journey millions of us men would gladly have gone on.  From Cleveland to Chicago to Baltimore to California to New York to Atlanta to Philadelphia and back to California was Dave Gallagher's journey.  Gallagher made his way to the Orioles after three years in the Major Leagues in August and September of 1990.

For his efforts, he was given an Orioles card in every major release of 1991 and a cameo at the end of the 1991 Orioles Crown set.  So of course he never appeared in a game as a Bird in the 1991 season.  He was dealt to the California Angels for two minor league players that never made their way to the big club. 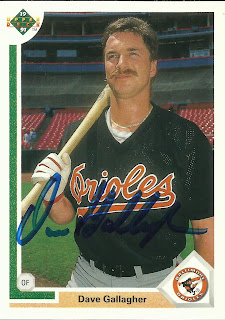 Dave has parlayed his playing career into a very successful post baseball career at nearly every level of competition.  He has penned a book entitled "The Little League Hitters Journal" geared to youngsters and fundamentals. He had been the hitting instructor for the Trenton Thunder before becoming a General Manager in the Atlantic Collegiate Baseball League.  Now he works with teenagers in his baseball training academy, having three players drafted in the 2013 amateur draft.
Pretty nice journey.
at 1:00 PM