The last time I had busted a vintage pack of cards, it wasn't vintage at all.  It was new, fresh exciting and it was probably 1987.My brother has been a little more adventurous in his pack ripping.

Recently he picked up a bunch of older packs from somewhere and had some good luck.  He has been working on the 1978 Topps set and was hoping to pull an Eddie Murray RC in good condition. He did.

He snagged a 1982 Topps rack pack for my birthday, hoping I could do the same with a Ripken RC.

It was my birthday, I was feeling lucky and I though it could happen.  It did not.

I don't know if these are the best cards from the bunch, but I thought they were cool. 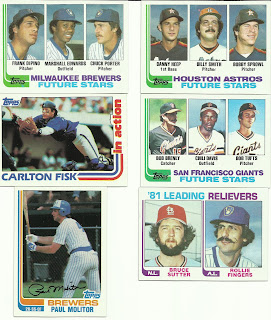 The Fisk is pretty damn sweet.  I got  thrill from opening up some old school, even if it didn't pan out.
at 8:54 PM