Of more frequent posts, hopefully.  I have snagged a bunch of new names recently and hopefully a card by card recap will get me into the swing of things again. 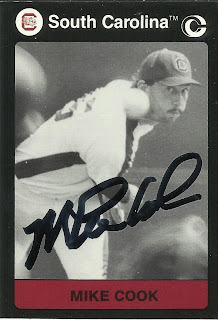 Cook was drafted by the California Angels in the first round of the 1985 Draft.  He shot through the minors and made his debut less than a year later.  He was not received well, even though his ERA declined with each major league season.  Mike made his hay in the minor leagues.
After a stint with the Minnesota Twins in 1989, Cook was exclusively a minor leaguer for more than 150 appearances over four seasons.  Then he got a shot with the Orioles in 1993.  For two games.  Three innings.  Zero earned runs.
In 1993, those stats earn you a spot in the 1994 U.S. Playing Cards Orioles deck of cards.  The two of clubs.  Really?  Two games and he gets his own card as an Oriole.  I am tracking down this set and will be working to get an Oriole upgrade into the collection.
He hasn't had a TTM success that I can find, but I am not sure how many guys out there are looking to add a Mike Cook minor league auto to their collection.  Maybe just maybe this blurry black and white auto from his college newspaper will be able to find a new home.
Time to hunt him down, in a nice way of course.﻿
at 1:00 PM