The Best Part About The Flu?

That's a very difficult question to answer.  It's a toss up really.

The disinfecting of the entire house?

The time off work?

Watching "Trouble With The Curve"?

A TTM success and time to blog? 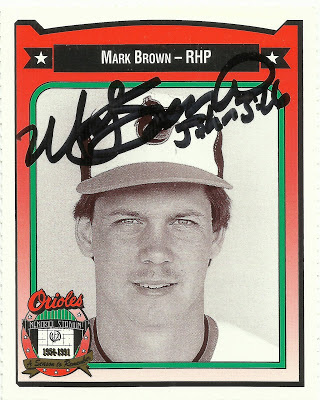 Mark was a sixth round pick of the Orioles that only had a cup of coffee with the Birds in 1984.  In nine appearances out of the pen he managed a sole victory, in the final game of the 1984 season. He struck out Jim Rice to end the season and his career in Baltimore.  That off-season saw him traded to the Minnesota Twins for Brad Havens.  A second season in the big leagues was all Brown would get.  His professional career ended in the Twins organization in 1986.
I sent my request to Mark at least six months ago, and as with most of my requests, I had forgotten about it.  The request came with a religious bookelt from Mark but also a handwritten note from his daughter apologizing for the delay.  She has been trying to get him to sign more fan mail and my success is a byproduct of that.
Thanks Mark and Kristen﻿
at 9:36 PM