Down On The Farm Friday: Ronnie Welty 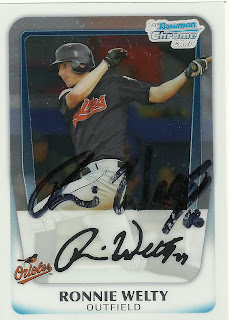 Ronnie's 2012 campaign was much better than his autograph I received back TTM.  It looks like a combination of a shoddy rubdown on my part and quick stacking on Ronnie's.  It is nice to see a great deal of consistency from his facsimile and original signatures.  Many times there is a huge discrepancy.

Spreading his time across the GCL Orioles, IronBirds, Keys and BaySox, Ronnie solidified himself as a top Outfield Prospect.  He hit .333, banged 13 home runs and drove in 55 runs, most of the power output coming at AA Bowie.  Welty struggled to stay healthy in 2012 appearing in just over 50 games, the lowest of his minor league career.

His main knock entering 2012 was the frequency of his strikeouts.  He struck out 31.5% of the time in 2011 and only 22.7% last season, all-the-while raising his average and power numbers.  His health seems to be the biggest hurdle for him moving forward, that and super glossy baseball cards.
at 12:00 AM