Hazewood.  The former first round pick of the Orioles from Wifey's Alma Mater, Sacramento High School, who played five games in the 1980 season, then fell off the planet.

OK, he didn't fall off the planet, but he did hide very well.  He had been a notoriously difficult autograph go buy, trade for or get in person.  He only has five minor league issue cards and the 1991 Orioles Crown card produced during his entire career.

That was until Chris Potter knocked on his door and set up a private signing.  I learned about the signing at the National Convention this year and jumped on the opportunity.  I was expecting a lofty price tag as sales of his signed card at the 2010 Convention were around $90.

$15.  A deal that could not be passed up.  Now I have this beauty in the collection. 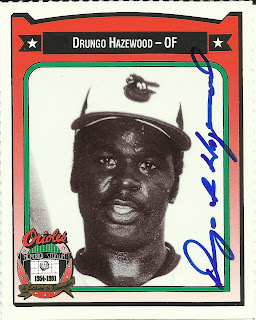 I found it fitting for my first real post in over a month to be about a lost Oriole.  Enjoy.﻿
at 12:00 PM