Down On The Farm

With every call up and roster move the Orioles make, I find myself pushed further and further away from my ultimate goal.  Typically I have to then scramble, pick up cards of the new Bird and try TTM or IP attempts.  Recently I have made scooped up a few cards of the players waiting in the wings.

Here is my first success from Norfolk.﻿ 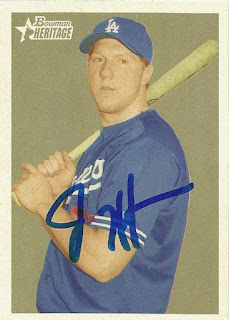 Currently has played in the most games for the Tides, patrolling the Outfield.  He is waiting for his second chance at the big leagues.  His two game stint with the Dodgers in 2011 being his lone promotion to the majors.  Currently, he is hitting .252 with 2 home runs and 18 RBI, good for second on the team.  He is a good overall player but the solid play of Xavier Avery after his ascension might make the roster a tough cookie to crack this season.  If he does, I got this one all locked up.  If not, I know a few Dodgers collectors I could deal this one to.
at 2:36 PM