I have been picking up a bunch of cards recently, but haven't been making any dents in my overall number. The Crown collection needs have diminished but I still have work to do. 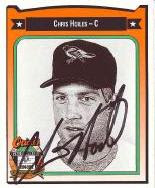 For some reason I chose not to have Hoiles sign a Crown card at FanFest 2010. Whoops. So a year and a half later I had to go out and grab this one.