My previous post about Fred Marsh can be found here.

I was able to purchase a signed Crown card of Fred for what I believe to be a great deal. His card came in last week and I am just getting around to sharing. 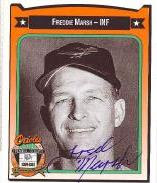 Marsh was destined to be an Oriole. His path to donning the orange and black had more twists than an episode of "Lost".

Here is his timeline:
1942 Drafted by Chicago Cubs
1943-45 United States Navy WWII
1946 Tacoma Class B Affiliate of Cubs
1947 Traded to Cleveland Indians
1949 Major League Debut for Indians, pinch runner, 1 game
1951 Traded to St. Louis Browns, first full season in Bigs
1952 May 12th-Traded to Washington Senators
1952 June 10th-Traded back to St. Louis Browns
1953 Traded to White Sox
1954 Traded once again, this time to the Orioles
1956 May 29th-Final game in the Big Leagues, with the Orioles
1958 Retired from professional baseball

The Browns/Orioles franchise owned him three times and dealt him twice over a four year span in the early 50's. But Marsh kept coming back to them and now his Crown card will takes its rightful place in my collection. At least for this collector, ending his back and forth journey to Baltimore.
at 7:04 PM