There's An Autograph On There

It is really difficult to see but I do have the newest Oriole in my collection. 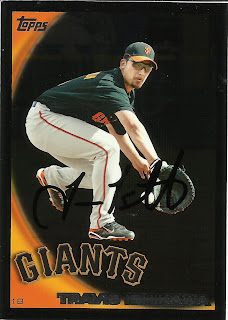 OK, it scans pretty well, but in person not clear at all.  I had to double check once I received this card, just to make sure it was actually signed.
Travis has never been known for his offense, mainly his defensive prowess.  But this year it was different in the minors.  Travis was tearing the cover off the ball in Norfolk and got himself noticed.  That and the clause in his contract allowing his release if he wasn't called up.  There isn't a daily spot in the lineup for Travis, but his release would probably help the Yankees.  So today, Steve Pearce has a mysterious wrist injury and Ishikawa remains on the roster,  We will see how he fits in to the picture moving forward.
at 10:53 PM