Freed Up Some eBay Funds

I have been spending more time on eBay recently, just got the app for my phone, and have been looking to cross some tough names from my list.  The majority of the players I need from the past have passed.

Most autograph traders don't have cards from the 60's and 70's laying around for me to scoop up.  If they do, they are looking for a deceased player in return, which I only have a few.  So I pull some scratch together and buy a few of the cheaper ones out there. 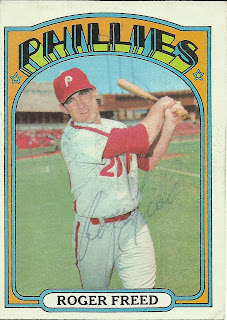 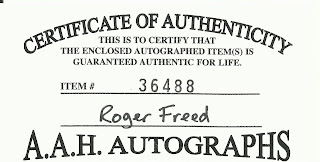 It's not the best autograph, the best pen or even the best card, but it was the one within my price range.  He has two cards as an Oriole, both dual players cards with other rookies that I hadn't seen available.  I had the choice between a multitude of '72 Topps and some Index cards and settled on this one.  I am happy with it.
I have tried to save the index cards for players from the 50's and 60's, but have been known to make an exception as needed.
Roger would definitely be classified as a journeyman.  He spent parts of eight seasons in the major leagues, over 10 seasons, with six different clubs.  He was signed by the Orioles in 1966, making his debut four years later in 1970.  He was traded in 1971 to the Phillies for Grant Jackson, Tim Hutto and Sam Parrilla.
He got a shot to play everyday in 1971 and 72 but couldn't hold on.  He was dealt a few more times, bouncing between franchises and all levels of the minor leagues.  Following the 1980 season he extended his career playing in the Puerto Rican Winter Leagues.
Roger passed away on January 9, 1996 at the age of 49, from heart related issues.
at 5:44 PM