Down on the Farm Friday: Nick Delmonico

A couple months ago I was able to secure an Auto of infield prospect Nick Delmonico. 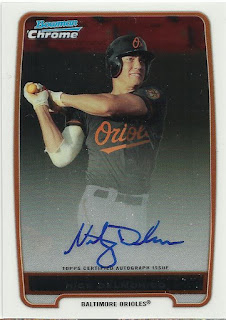 Nick is listed as a third baseman on this card, yet failed to play an inning at that position in his first season in professional ball.  With DelMarva he played 57 games at first, 31 and second and DH'ed for 7 games.
He showed a little bit of pop, jacking 11 home runs during the season and hitting at a .249 clip.  There was a little speed taking 8 bases during the season.  His fielding was suspect at first and bad at second, but what do you expect from a 19 year old?  They can't all be Manny Machado.
I look forward to his spring and see how he performs in Frederick next year.
at 12:56 PM