Merry Christmas everyone. I hope you are enjoying time with the fam, relaxing, eating or just being off work. Whatever the day brings, I hope happiness follows.

I received a lage package with some new additions to the collection. Both feature pitchers as a Bird, where I had previously not had. 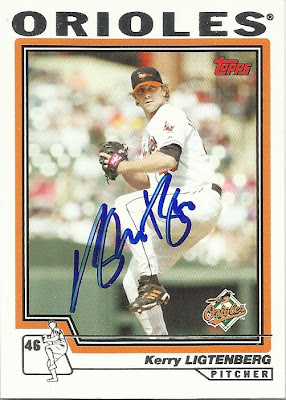 Ligtenberg can be described as a journeyman pitcher with a career spanning 8 seasons with 4 different teams. He began his career as a Braves reliever in 1997. He became their closer in 1998, saving 30 games. Then his role diminished and he was granted free agency. He came to Baltimore as his next stop. His season is Baltimore was no differnt than his previous 5, solid. He recorded a 3.34 ERA in 68 games, finising with 4 wins. His careeer tailed off in Toronto and Arizona before being relegated to the Independant Leagues in 209. A kneew injury summarily ended his pitching career, 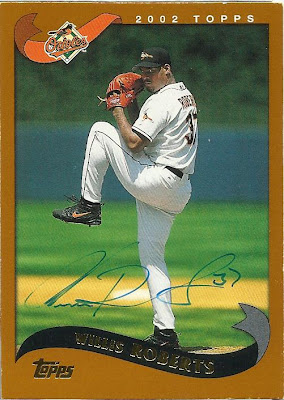 I remember hating WIllis Roberts when he was in town. I habe no real idea why though. He wasn't awful, but every time I hear his name or see his picture, I cringe. I probably remember seeing each one of his 27 surrendered homeruns vacating the park.

Please view my Ligtenberg and Roberts cards for trade.

Here's wishing you a very Orange Christmas.
at 11:00 AM