Keeping up with the Joneses

I have failed to keep up with the Joneses in my Oriole collectiong. Out of the seven Joneses to don the Orange and Black, I had only kept up with three, Adam, Doug and Ricky.

Then, out of the blue, fellow Oriole collector Russ reached out. A few emails and a Kam Mickolio duplicate autograph later, I am one step closer to keeping up with those pesky Joneses. 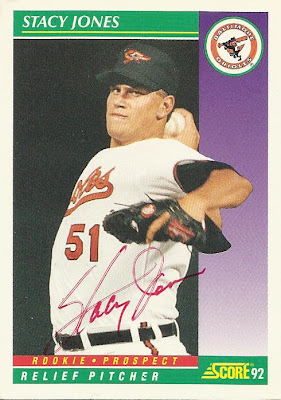 To say Stacy Jones was a short timer, may be an understatement. He made his debut for the Orioles in 1991 and lasted a whopping 4 games. Stacy fought hard to make his way back to the big leagues and after 5 seasons, finally got the cahnce with the White Sox. 1996 were his last 2 major league games, totaling 6. He stuck out the 1997 season before calling it quits.

He has been hit or miss TTM so I can save on a stamp. I do have his Topps Debut card which is pretty sweet though. Who knows? Maybe I will send to him at some point. For now, no need.

Anyone holding on to the final Joneses, Gordon, Odell or Sam?
at 7:13 PM