Elrod was loved in Baltimore and must have liked it here. He made his debut in 1968 becoming the starting backstop the following season. His abilities behind the plate made him a favorite of the staff and he remained in Baltimore until 1972.

He was traded to the Chicago Cubs for Tommy Davis. He was dealt for the Cubs to make a run, they did not. Following the 1972 season he was traded back to Baltimore for Frank Estrada. His second tour of duty in town had him splitting time behind the plate until he was dealt to the Yankees in 1976 as part of a 9 player deal.

He must not have liked New York, can't say I blame him, as he signed back with the Birds after his contract expired. His final two seasons only saw him in 14 games but his retirement marked the start of his second career.

Many of my generation knew Elrod as the Orioles bullpen coach, a position he held for 27 seasons. Ellie would always engage the fans, answering baseball questions and routinely signing autographs from the pen.

He doesn't hold any on field records but he does have the distincion of being the longest serving coach and longest combination of player and coach. All told, Ellie was in Baltimore for 38 seasons until his death in 2005. Although his #44 has not been officially retired, no player/coach has worn it since his passing. I think they should retire it, what say you Orioles fans?

Then got this:
Elrod Hendricks 1987 Orioles Postcards 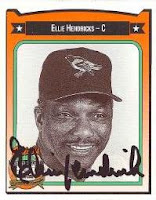