Every few weeks I check out SportsCollectors.net to see if TTM signing habits have changed. Most times it is just the continued successes of good signers and dismissals of those who don't. A few weeks ago I saw a success for Eddie Robinson who I needed to add to my collection. In the notes it referenced a $10 donation for the autograph.

I grabbed some paper and a pen to draft a letter but an eBay alert grabbed my attention. An Eddie Robinson 1991 Orioles Crown auto was up for sale from a reputable collector. I did some research and eventually bid on the autograph, total price $11 (including shipping).

I know I jobbed myself 12 cents if I had sent the TTM request with donation but my luck recently TTM has been awful. I had to take the sure thing. Here is my sure thing:
Eddie Robinson 1991 Orioles Crown #387 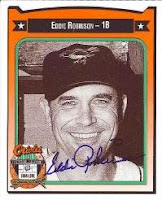 Eddie was a 4-time All-Star in the 40's and 50's, playing for nine teams over a 15 year span. The Orioles were his last stop in 1957, playing in just four games with four plate appearances.

Eddie played in two World Series', 1948 and 1955. His first appearance gave him a ring with the Indians, also their last ring. In the 1955 Series as a member of the Yankees, he lost to the Brooklyn Dodgers in their first and only championship. Just a little randomness to brighten up your day.
at 3:11 PM