A Tale of Two Reunions

Today the Baltimore Orioles were celebrating the 40th anniversary of the 1970 World Championship team at home with a pre-game autograph signing.

With much less fanfare, my fraternity Delta Sigma Phi was having a reunion at a local restaurant, Zen West.

I was forced to chose between getting three autographs I need for my collection in the sweltering heat, or all you can eat Tex-Mex, a few brews, friends, air conditioning and the World Cup. I hate to admit it but the deciding factor was definitely the air conditioning. I am a pansy when it comes to gross, sticky weather. All-told I probably spent as much for the reunion as I would have on tickets, grub and libations, but none of my brothers' autographs hold any value for me.

If anyone was at the game and has an extra Tom Phoebus, Pete Richert or Merv Rettenmund please let me know. Looking for all three on a Crown card or Phoebus on anything.

But today was not a total autographing loss.

This was accompanied by his drier twin brother. 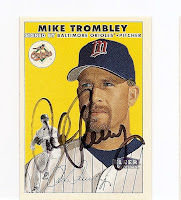 Trombley was signed away from the Minnesota Twins following the 1999 season and spent a more than a year in Baltimore. The birds signed him to a very lucrative deal trying to turn the franchise around and sure up the pen. He lived up to his end putting up good numbers and chewing up innings. Unfortunately the team stayed below .500. The following season he was traded at the deadline for pitching prospect Kris Foster and future starting catcher Genonimo Gil.

If anyone needs Trombley's auto, just let me know.
at 6:20 PM