Just so happens that on the same day the Orioles break a 10 game losing streak to the Yankees, I broke my losing streak TTM. Only one card came my way but I was stoked to see it in the mailbox.

It's funny how a lone success can make everything all better. 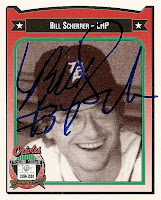 Bill was only in Baltimore for four games during the 1988 season. His numbers (13.50 ERA) were indicative of how the team played (21 straight losses). Overall his professional numbers are average, much like many other relievers out there, but he does own a ring. He was a member on the 1984 Detroit Tiger World Championship Team, only allowing one run in his three appearances versus the San Diego Padres.

After his playing days were over Bill added a pair of World series rings, first with the Florida Marlins and then the Chicago White Sox as a scout. He is from the Buffalo, New York area and in 2006 was honored as a Greater Buffalo Hall of Famer. He was inducted with a stellar class, NFL Defensive Back Bill Hurley, NFL Hall of Famer Bruce Smith and NHL legend Dave Andreychuk. Not bad company to keep.
at 5:33 PM