I'm not cheap, I just don't like to buy my autographs. That all changed last week, pun intended. I rolled all my loose change, cashed it in and sent out a half dozen requests to players known to charge for their signature.

Inflation is even hitting the old timers, when I sent to Don Larsen previously without knowing he charged, I received a note stating autographs were $7. I had to send $10 this time. 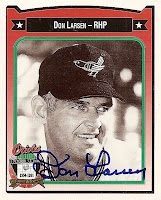 Larsen became an Oriole by default when the team moved from St. Louis before the 1954 season. Unfortunately the change of scenery did nothing for Larsen's record as an Oriole. Of course everyone knows Larsen as the only perfect pitcher in the World Series, but few know he went 3-21 in his first season in Baltimore. His career record with our franchises was 11-35. He must have been so happy to get out of town. Larsen was a combined 14 games over .500 playing for his other six franchises while taking home two rings with the Yankees.

Included in my return was an order form from Mr. Larsen for all his signed Yankee schwag. I think I will pass, that shade of blue clashes will all the orange I have on my walls.
at 4:02 PM