I scored a little West Coast love from an East Coast guy Nick on SCN. 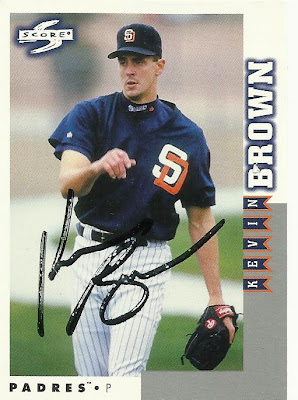 I never liked Kevin Brown. Not as a Ranger. Not as a Marlin. Not as a Padre apparently. Not as a Dodger. Certainly not as a Yankee. I can't even give you a good reason. I just never liked him.

What I do like is autographs, and this one is now chilling Jarvis and Larry in the collection. He hasn't been the best signer over the years so Oriole versions of his cards are toughr to find. There are a bunch of his early cards out there, but I guess he stopped signing as much as he became a star. There it is, my reason. Perfect. 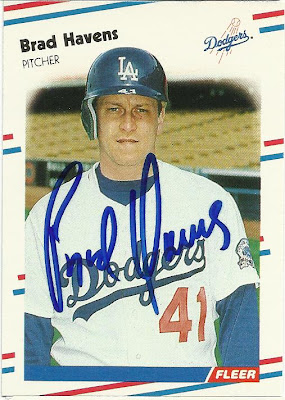 I harbor no ill will toward Brad Havens. He was part of the Orioles when I was a young impressionable fan, when the Orioles could do no wrong. So Brad can do no wrong either.

Brad never really lit up the box scores but he was a servicable reliever from 1981-1989. You have to be pretty damn good to have an eight year major league career. I need to upgrade to his Orioles Crown card, or any Oriole card for that matter. But he isn't a reliable TTM signer. Anyone sitting on a stack of signed Brad Havens Orioles cards that wants to give one up? I will make it worth your while. I have this sweet 1988 Fleer card?
at 5:15 PM