Step Inside The Way Back Machine

Camden Yards was crazy. An electric atmosphere with an intensity I had only been a part of once before. The hottest ticket since September 6, 1995. Crowds of people surged around the stadium just happy to be a part of the event unfolding. Scalpers were more brazen then ever, trying to coax a ticket from fans at the gates. Any ticket. Supply and demand were in a brutal wrestling match, demand being the ultimate victor.

As I entered the stadium at Eutaw Street, I remember having a weird feeling. I wasn't anxious, or excited, or even saddened by the end of an era. I felt ...lucky, and that felt out of place entering the Yard.

I was lucky to be at the game, many of us were. The terrorist attacks of September 11, 2001 changed everything in our country--least of all the MLB schedule. A full week had been shuffled and all previously devised plans to watch Cal end his career in New York were thwarted. I was not planning on being one of the 48,807 fans to click the turnstile.

I was lucky to have an Uncle willing to spoil me and my brother (21 and 23 years old at the time). My experience at each of Cal's milestones is directly related to his generosity. His love.

I was lucky to have grown up in the Washington D.C. suburbs after the Senators left, twice, and before the Nationals arrived. The Orioles were all I had for a home baseball team and, as I grew, so did my devotion to the Orange and Black.

But we were all lucky. Lucky to tune in, show up, or listen to one of the greats every day.

This day wasn't about a baseball game--the outcome was of zero consequence. It was about a city, a state and its fans showing their appreciation. This game marked the end of Cal's career but I felt more joy saying "thank you" on this day, than I did saying "congratulations" in 1995.

I didn't pay much attention to where our seats were when I looked at my ticket. All I knew was there would be no elevators and escalators for this guy--I was on the lower level. The walk from Eutaw Street was mobbed and it seemed to take forever to get to our section. We stopped just under the press box, section 38. When we stopped, I finally looked at the seat number on my ticket.

Four rows off the field, directly behind home plate. One of three seats in our entire row due to the access tunnel to the belly of the stadium that was in the way. I have never inquired as to how my Uncle obtained the tickets and I probably never will. I am quite positive the answer would involve having sold something to a demon or such.

My seat allowed me to talk with Earl Weaver, Frank Robinson, Jim Palmer, Tim Kurkjian, and even Kelly Ripken. We were smack dab in the middle of the VIP seating and I was no VIP. But I faked it. I didn't ask for a single autograph, nor did anyone else. The day wasn't about getting autographs (gasp).

When the game started, my brother pointed across the tunnel to the gentleman sitting in the mirror version of my seat. Ed Norton, my favorite actor at the time. After realizing I had the same seats as Ed Norton, the game became a blur. I remember only slivers of the game itself. Strikeouts. Pop-ups. Brady Anderson. On-deck circle. Why did you swing?

After the final pitch my brain woke back up and vivid details remain. The cacophony of sobbing, cheering, clapping, and disbelief. Stunned fans couldn't believe they were cheering as one of their own struck out to end the season. To end his own career with Cal waiting for one last chance. His body language said it all: "Sorry". We cheered even though our team won 63 games, lost 98 and had a dreadful tie. We cheered despite our team having gone 17 years without a World Series appearance.

Just another in the crowd, I rose from my seat, cheered on my sports hero and snapped a few pictures.

Little did I know, someone was snapping back. 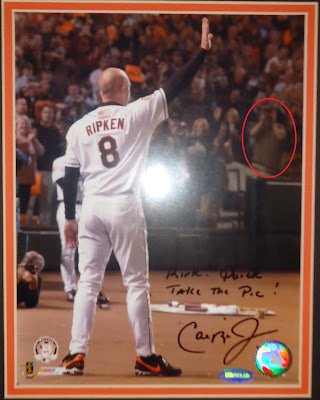 I am the circled gentleman on the lower right, taking pictures. My face is brilliantly shielded by my camera so as to conceal my identity. And yes, this awesome photo and autograph were given to me by my Uncle. He spotted me in the background of the image on Ironclad's website. Cal personalized the autograph, "Kirk, Quick Take the pic!" and it was framed for me. My Uncle never ceases to amaze me.

Hanging this picture in my man cave made me realize I had never posted about it before. Sorry about the lengthy read, but I just had to celebrate Cal a little.