I missed a 2 month window of successes for Dennis "El Presidente" Martinez in the late summer, but like a boy scout I was prepared. I made a deal a while back sending a bunch of unsigned Allen & Ginter for some in person help. My guy met Denny at a private function this winter and was able to grab two signatures for me. 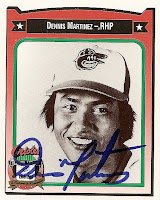 "El Presidente" pitched 11 years for the Orioles and wasn't even half-way done with his career. All-in-all he pitched in 23 seasons, recording 245 wins, most ever for a Latin American pitcher. Denny was an enigma, getting stronger as he aged. His first All-Star appearance came at age 35 and his highest salary was over $4.5 million, at age 41. And for good measure he threw in a perfect game at age 36.

Since retirement, Denny has been elusive TTM. He tends to sign in bunches while disregarding other times of the year alltogether. He is curently an instructor with the Cardinals organization but I don't know his IP signing habits.

I had an extra Martinez card so sent it along to see what would happen. This happened:

Jim Dwyer's Crown card made the trip but came home blank. Can't get em all signed I guess.
at 2:15 PM