Richert may not be a household name, but he was a two-time All Star who started his career unlike any other pitcher. His first appearance as a Dodger was in relief, where he struck out the first six batters he faced. He's the only player to do that. When the game was over he had recorded seven strikeouts and his first major league win. He was later traded to the Washington Senators where his career took off. Washington saw him elected to two straight All Star games, recording his only double digit winning seasons.

Richert started the 1967 in Washington, but finished just north on the beltway in Baltimore. This season was also his last as a starter, making the transition to the bullpen. The move lowered his ERA and extended his career. After 37 saves in Baltimore he was dealt yet again, this time back to the Dodgers. He lasted three more seasons in L.A, St. Louis and Philadelphia, retiring as a Phillie following the 1974 season. 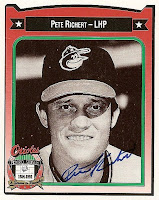 Richert has been a solid signer in recent years. I overlooked him when I first started sending TTM and just fixed my mistake this year. This beauty is available for anyone looking to add him to their collection.