December was a busy month for me. Not with collecting unfortunately, but with life. The holidays are always crazy and work had drained me mentally. When I came home from work, vegging out in front of the boob tube was all I could do, and my collection has suffered slightly.

With the new year has come a renewed vigor of collecting. I am sending out a bunch of TTM requests this weekend and have also received a few additions over the last month. 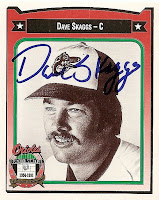 Skaggs played 4 of his 5 major league seasons in Baltimore sharing time behind the plate with fan favorite Rick Dempsey. He was drafted in 1969 and spent the next 8 seasons working his way to the majors. His debut came in 1977, cementing his place on a major league roster. His bat never came alive but he could hold his own behind the plate. His largest distinction may be as the last Oriole before Cal Ripken Jr. to wear the #8. 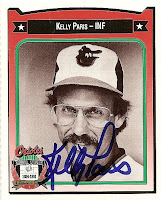 Paris played on 4 big league teams from 1982-1988, only spending multiple seasons in Baltimore. He was a shortstop and third baseman, but never saw any time here at shortstop because of Cal. As an Oriole in 1985 he failed to reach base in 9 attempts but was recalled in 1986, but fared only marginally better. His last big league season was in '88 as a member of the White Sox recording the only 3 home runs of his career. He played his final professional season in '89 in AAA before retiring.

Both of my successes came in about 4 months, receiving Skaggs before the New Year and Paris, shortly after.
at 10:46 AM