When I was 9 years old I took a Spanish class in elementary school and my teacher named every student their Hispanic equivalent. I threw her for a loop. What kind of name is Kirk anyway. She eventually settled on "Kiko". Little did I know that I was being lied to, I don't translate.

But I wasn't alone. 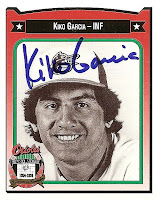 I actually thought his given name was Kiko. Fooled again. How do you get "Kiko" out of Alfonso Rafael?

I don't get it. Alfonso was never a heavy hitter, but he definitely came through when it mattered. His lifetime average was .239, but in the '79 postseason he hit .355, with 3 extra base hits and 8 RBI's as the Orioles came up short in their championship bid. Here is a little perspective, his highest number of RBI's in a a season was 27, his postseason was not too shabby. Had the Orioles pulled out the Series, he probably would have been the MVP. Damn the "We Are Family" Pirates.

Kiko is another really quick response, only 8 days in transit. What a slacker, Merv Rettenmund got his back to me in a week. Kiko and Merv will always be linked in my collection, TTM successes a day apart and they initially came to my collection through the same trade. Kinda eerie.