The East Coast is getting crushed by a blizzard, with Baltimore being no exception. When I left for work at 7am there was six inches of snow on the ground and at last count 16 inches and counting. In between the snowflakes life has slowed to a crawl with many businesses closing and most people staying bundled up inside their homes.

My mailman however, made his daily rounds. When I checked the box he hadn't brought junk mail, bills, or flyers, just one lonely self-addressed stamped envelope with my name on it. My normal thoughts about the signer crossed my mind but quickly turned to: "seriously?" All that snow and my treacherous front steps for one envelope. It just didn't seem worth it, but I am thankful.

This is who he brought: 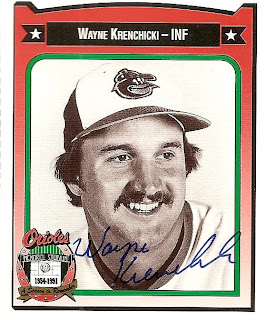 Wayne was the seventh overall pick in the 1976 draft by the Orioles and made his major league debut three years later in 1979. During his three year career with the Orioles he played every infield position but first base and mixed in a little DHing. He never hit for a high average with the big club and moved on to Cincinnati, Detroit and finally Montreal. After leaving the Orioles his average slowly climbed and he finished his career above .366.

His autograph makes a total of 166/310 (55%) living players from the Orioles Crown set. With the holidays approaching I haven't sent many requests so the successes may be a little sporadic but hopefully some trades pull through to supplement the collection.
at 8:10 PM